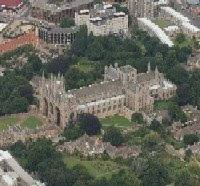 Peterborough is part of Cambridgeshire and is located 78 miles north of London. It is only less than 50 minutes by train from London Kings Cross rail station. The city covers a land area of 343.44 square kilometres. As at 2007, it has a population of 163, 300. Population density, therefore, is 475.48 persons per square kilometre.

Now let's compare these figures with that of two of my former home cities in the Philippines, Tagbilaran City in Bohol and Cebu City in Cebu. Both cities are found in the Visayas region. 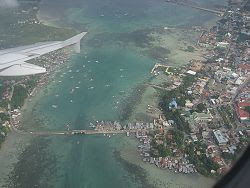 Tagbilaran City was my childhood home for ten years. I have not cut off my ties with the city, of course. A lot of my childhood friends and my wife's family are living there. My family lives in nearby Baclayon town. Tagbilaran City covers an area of 32.70 square kilometres. The population in 2007 was 92, 297; thus, population density is 2,822 persons per square kilometre.

Cebu City was my home from my late teens when I went to university there, and up to the start of my working career. My older brother who now lives there with his own family, is still renting out the same apartment we have lived since 1990. Cebu City covers an area of 291.20 square kilometres and has a population of 798,809 (2007 census). Population density in the city is 2,743 persons per square kilometre.

In terms of area, Peterborough is larger than Cebu and Tagbilaran (individually and in combination). However, in terms of urban characteristics Peterborough and Tagbilaran are similar although Peterborough is more advanced. Cebu is a highly urbanised city. Its metropolitan area, which includes several neighbouring cities and towns, is considered the second major city in the Philippines. Cebu can be compared to Birmingham and Manchester; it has a metropolitan population of two million people.